The Plant Phenotyping Dataset and the CVPPP Challenges: 4 years later

This summer (June 2018) marks almost 4 years since we launched the first Leaf Segmentation Challenge and we made the first version of the dataset available. While we initially created a tech report to offer details on how we collected the data to accompany the challenge we quickly realized that making them open and publishing a paper that describes them such that it can remain in perpetuity it would be the best way to advance science forward.

Well we couldn't have been more right. In the following few paragraphs we want to briefly describe the current state of the data and the accompanying challenge in who uses them, who cites them, and how new efforts have been supported.

The dataset appeared in the public domain in December 2015. Purposely we ask the users to fill in a form with some rudimentary information that we use to analyse how useful the data have been for the broad community prior to downloading the data. Our initial goal was to introduce the problem of phenotyping to mainstream computer vision.   The analysis below draws from the data from this form.

Fig. 1. Close to exponential growth in downloads in the first three years (requests double every 12 months).

Fig. 2. Are we expanding beyond specialists that are familiar with plant phenotyping? Clearly yes. More than 60% of requests come from people that are not experts in the area (as of June 2018, please see figure for current numbers).

Fig. 3. Are users experts or also students? Almost 60% of the users identify themselves as students (as of June 2018, please see figure for current numbers).

Referring to Figures 1 to 3, some of the facts we can see:

This even rudimentary analysis, demonstrates that we have accomplished our most important goal: that of introducing the societal important problem of plant phenotyping not only to the broad computer vision community but also directly to young researchers and students.

As of now (June 2018) the related paper has more than 35 citations according to Google Scholar. [1]

While some are peripheral mentions, or others come directly from the co-authors (can be seen as self-citations), a few really stand out as those are from colleagues publishing in top computer vision venues such as CVPR, and ICCV. This is not surprising since thanks to pioneering work from Romera-Paredes & Torr [2] and Ren & Zemmel [3] our dataset has become almost a benchmark in multi-instance segmentation. Dr Romera-Paredes (DeepMind), during his keynote at CVPPP @ICCV 2017 said, “The plant [CVPPP] dataset is considered the MNIST for multi-instance segmentation”. To be compared to MNIST, perhaps the most well-known dataset for image classification is definitely a strong indicator of the impact of this dataset. 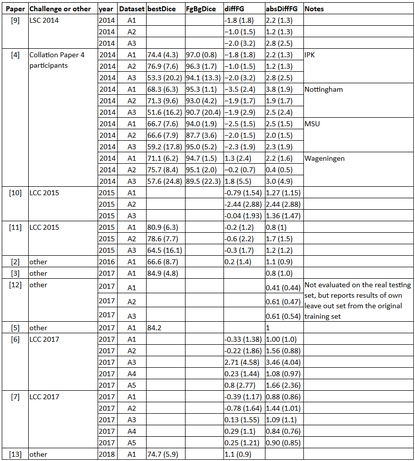 Several others have followed the trend of using the dataset to test and evaluate their pipelines. Table 1 shows the use of the dataset as of now. While we see that performance is improving, it seems that the broad computer vision community has focused on one source (A1) and as such we advise that more broad use and transfer learning attempts are made (i.e. to evaluate the performance of methods on other data sources as well A2 to A5).

As a consequence of the success of the dataset and the frequent requests to evaluate results, we made the Leaf Segmentation Challenge (LSC) available on CodaLab recently. As of now 11 participants registered and submissions slowly reach the leaderboard. We hope that this service will be well received and further helps the community to transparently evaluate their findings.